Here in China, change seems to be the only constant. We meet and welcome people into our extended family, live with them for a short time and then they move on. Interns finish their terms and head out in new directions. Kristin, graduated last July, called today and told us that in pursuit of the call she had accepted a job in Shanghai. Foreign helpers come as called and, boss willing, leave under the same direction. Shannon came in from Utah, managing to endure the abuse Trudy and I heaped upon her, spent a good 3 months with us and headed home last week. She will be marrying soon and we wish her and her future husband all the best. My own children, since leaving the nest, have made it back from time to time to visit and to answer the call on their lives. Barbara is here and in a few months will wrap up more than year and a half of good work. We are already missing her. This past week, Greg, Alice and Morgana inflicted the most recent wound. They packed up and went to Italy.

We met Alice while she was a student at the local university in September 2006. A very vocal atheist, she had come to China from Italy to escape having to deal with the church or God. Good plan but other plans were in the works. She and Greg began to hang out and in June of 2006 she was dunked and an OFH intern. Shortly thereafter, Greg left us for the US and a year at CCBC. Alice very nearly finished her final term at OFH but the Sichuan earthquake interrupted things.

The Sichuan quake also brought Greg back to China. Most of the OFH interns and staff responded to the quake by going to the area to coordinate and deliver relief supplies to the victims. Greg joined us almost immediately and began to coordinate a team of volunteers that essentially lived in the camps in order to maintain and build the relationships that allowed them to work with kids and their families. Their efforts allowed us to lead hundreds of children through the Operation Safe Camps. Alice was on that team and a relationship that had been born in Alice’s struggle to faith blossomed into a wedding engagement. Greg and Alice came home to our end of China from Sichuan long enough to get married on December 30, 2008, honeymoon in Thailand and head back to Sichuan to pick up their work where they left off. Three months ago, Morgana Shalom Espinoza, weighing in at 3.8 kilos, joined their staff.

Please keep the kids lifted as they head for Italy and a stint at the CCBC campus in Monte Belluna. Their hard work and dedication has been an example to everyone that has come in contact with them. There is no denying the fruit that the vine dresser has coaxed from their lives. Their desire is to be back here in as little as a couple years to provide foster care for orphans and work with women coming out of prostitution. Trudy and I are hoping to see them back on staff here as they pursue that end. We’ll have to see how the boss works that out between now and then.

In the vine,
Tim 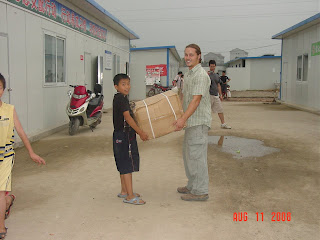 With a little help from a friend, Greg is delivering book bags for 600 students that have lost everything they owned to the quake.
As Greg looks on, Alice marking her new life, July 8, 2006. 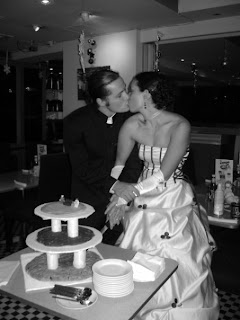 The best day of Greg’s life prior to Morgana. 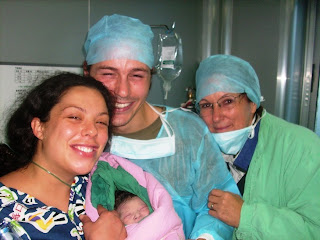 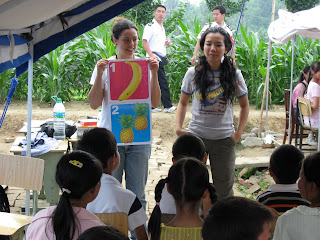