We landed at about 12pm and we were so excited to be there! Our drive from the airstrip to the lodge where we were staying was amazing! Everything that you see and know about the African savanna came true. The zebra and wildebeest were everywhere. We stayed at the Intrepid lodge. We checked in and got settled for our two day safari adventure at around 12:30pm on August 7. At the lodge we found this suspension bridge that was straight out of the old jungle book cartoon.

Our first game drive was a huge success. We saw a momma lion and her cub feeding on a wildebeest. In Uncle Wes’ eyes that was a beautiful beginning to our safari. After we crossed paths with a herd of elephants. There were about five in the herd. If I remember right there were two adorable little babies and three grown up elephants. The guide said that if the babies can still pass under the mother’s stomach that it was under one year old. We would see a baby elephant later on in our journey that would be smaller and closer to the one year mark. There were plenty of zebras, wildebeest (1.3 million were there due to the migration), Thompson gazelles, warthogs, mongoose, impalas, topis, and safari trucks. We really wanted to see cheetah, lion, elephant, leopard, rhino, and giraffe.
-Haley Jalinski 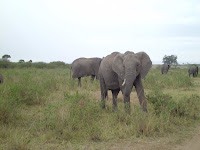 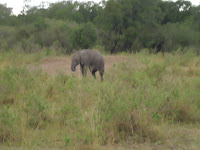 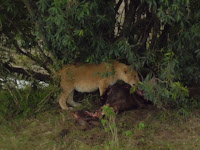