Out of Our Comfort Zone 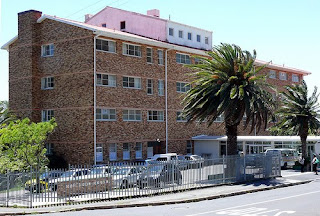 Recently I had the opportunity to go and minister at the Booth Hospital in Cape Town. It is a Salvation Army ran hospital for patients who are on their last leg. We go and pray for these patients, some for salvation, some for healing and others just for the strength to make it through the day.

I must say that hospitals are not my favorite place to be. When I was asked to come and join the regular team, I was a bit hesitant but I know that the Lord would sustain me. These are the people who need to know how much God loves them and also, for some, today may be the last day they are on earth to receive the Lord as their savior.

As we came into the hospital, there are many patients outside relaxing in their wheelchairs or on benches. There was a man who was struggling with at meth addiction and the drug had literally eaten away most of the inside of his body. He was a shell of a man sitting in his wheelchair. He explained to me that he had accepted Christ and was now waiting to die. He didn’t want to be released back to his home (he had made an unexpected recovery) because he was afraid of going back on drugs. We prayed together, for strength and for the Lord to give him power in these areas.

The best meeting I had was accidental on my part. I went into a patients room by mistake and there were three people sitting there. There were two patients and someone visiting them from home. At first I realized that I was in the wrong room, but the Lord told me to stop and give them the Good News. I had some tracts that talked about where they went when they died and they had a choice to make about heaven and hell.

I asked the three people if they knew where they would go when they died and they all said hell because they had not lived such a good life. I gave them the tracts, explained the Gospel message to them and then prayed with them. Two of them accepted the Lord!! The other one was not sure that Jesus could forgive him for all the bad he had done. I obviously explained to him that Jesus could, but he was not willing. He two friends talked to him in their own language and thanked me for coming in.

At that same time, one of the other people who I came with had three other people accepting the Lord too. In that one short hour, 5 people came to be citizens of heaven. What a wonderful thing! We praise the Lord to see the fruit of such a hard ministry. For me, it shows that the Lord works in our weaknesses. Like I said before, hospitals are not my favorite places to go. I would never choose to go there, for ministry or for personal help. But the Lord had something different that day for us.

I hope that you are not letting your fears or weaknesses stop the Lord from working in your lives. He just may have something amazing for you when you die to yourself and follow Him with all you have.

You can follow all that we are up to in South Africa at www.bobandsu.blogspot.com