Mission To His Country 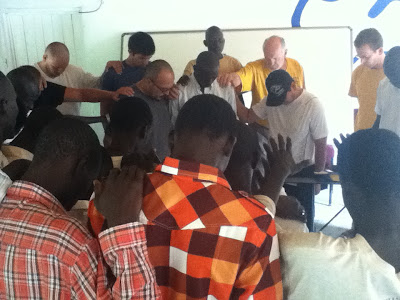 Today one of our senior chaplains begins his journey back to his hometown, one of the most dangerous areas in the Sudan.

Raised in a Muslim home, he came to know Christ after someone gave him an Arabic Bible. Since his conversion, he has endured much for the faith. On one occasion, he met a soldier who had been badly wounded by the enemy, only to learn that the enemy had mistaken this man for him.

He has been praying for men who would join him on this journey no matter what the cost. For a while, there were no such men to be found, so he began reaching out and discipling the men around him. Now he returns to his hometown accompanied by a full battalion.

This morning, chaplains and guests gathered to pray over him before his departure. Afterward, I had the privilege of speaking with him for a few minutes.

“I am on a mission to my country,” he said. “It is difficult. All the people are Muslims – all of them.”

He compared his countrymen to people sitting together in a dark room. He said he wants to open the door for the Light to shine on them. “It is very difficult for me,” he repeated. “But I know that the people of America will pray for me and help me.”

He asks that you would pray for his countrymen to come to know the Word of God; for the Holy Spirit to move; and for him to be strong to fight with the Word of God.