Joyce’s Story: "He Took Me Away From The Dead" 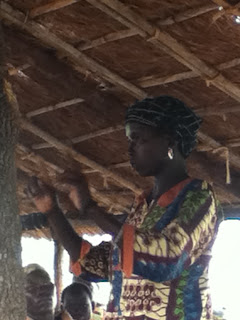 At the conference this past weekend, we were encouraged by the testimony of Joyce, a young lady who often leads worship for the women’s ministry in Loa.
“What God has done for me is really above all,” she began. “I don’t want to go far back in my thoughts; I just want to thank God for what great things He has done in me.”
Joyce went on to share her story with the ladies from Loa and Jele who had assembled for the conference.
When Joyce’s mother failed to bear him sons, Joyce’s father acquired a second wife. When this second wife bore him a son, he rejected Joyce’s mother and their daughters – including Joyce – and turned them out to fend for themselves.
This second wife was known to be a poisoner, and the community challenged Joyce’s father to put her away or leave the village. He and the second wife complied and left for Uganda, but after a while, they showed up again. In consequence, this past April, the villagers killed him, chopped up his body, and threw the pieces into the latrine.
When Joyce attempted to return to the village, she found that her father was dead and that though she herself was no poisoner, people were speaking against her and threatening to kill her as well. Heartbroken, she went to the church and unburdened herself before the congregation, requesting prayer.
Joyce knew she was innocent of all wrong. “If they kill me, they kill me,” she resolved, and planned to go visit her grandfather. However, the Holy Spirit stopped her. Later she learned that her grandfather and uncles from Uganda were threatening to kill her, claiming that she had accused them before the pastor and prayed for vengeance on them.
In the coming days, Joyce was unable to attend even church gatherings because of all the people who were against her. She became very discouraged, and it even occurred to her to kill herself.
Unexpectedly, several people from the church showed up at her house to encourage her and share the Word of God with her. “I don’t have any brothers,” Joyce explained. “But God added to me brothers and sisters. Today you see me in front of you because of the encouragement those brothers gave me.”
Joyce testified that now her sleep is peaceful and she can forget her troubles. “I am praising God with power because I know He did great things in me,” she said. “He took me away from the dead. I want to lift God up in this church.” She urged the ladies listening to love others as themselves.
Vicky encouraged Joyce that she has a Father in heaven and sisters, brothers, and a home in the church. We prayed together, thanking God for the beauty that He causes to rise from ashes.
Joyce requests prayer for her sisters, since there is no one to provide for them now. She also requests prayer for herself, saying that there is still a wound in her heart that pains her sometimes even after she worships God. She senses that Satan is still near and wants God to show her and her family a way.
Praise God for this testimony! Please keep Joyce and her two small children in your prayers.