LIFE IN A WAR ZONE 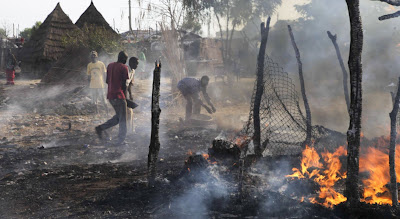 We live in a an always-on world of instantaneous communication; yet, in the Nuba Mountains, frontline battlefield reports often have to wait for our chaplains who serve there to relay them person-to-person.  The following is an excerpt from one of our Senior Chaplain, J**** T***, serving in the Nuba Mountain region.

June 6th:
Sudan Armed Forces (SAF) launched an attack on the Sudan People’s Liberation Army (SPLA) base in the Nuba Mountain Region; including the Integrated Units headquarters (HQ), the home of the Governor, and the houses of all political leaders and commanders.  The battle was short, ending the same day with a victory for the SPLA.  Several enemy were killed and arrested.  Several machine guns were captured along with Rocket Propelled Grenades (RPGs).  Only one SPLA soldier was injured.
June 9th:
Our finance officer was killed due to shelling near my home.
June 10th:
My wife miscarried as a result of the bombing by SAF aircraft [Antonov, Mig and gunship] from 06:00 to 19:00.  This led to the miscarriage of eight women, among them my wife. One SPLA soldier was injured.
July 15th:
I was given the assignment to move from Kadugh with 350 new soldiers to open a refugee camp at Yida.  Before my mission to Yida, a terrible thing happened, but God Almighty saved us by His power.  It was there in Kadugh, the capital of the region, and at the HQ of operations where the enemy shelled us at 07:00 with three big artillery guns. One shell exploded 50 meters to my right but it did not harm anyone. The second fell between the high officers, me and the OPs officer, but it did not explode. The third one fell in front of us while we were going up the hill.  It landed a ½ meter away, but it too did not explode. On the same day, while we were moving from a big tree to a downward position, an Antonov aircraft bombed us with several bombs that destroyed the tree that we had just moved from.  We thank God Almighty that He has saved us through these hard times.  (Psalm 103)

Please continue to intercede for the chaplains who are courageously serving across several battle fronts, and for the hundreds of thousands of civilians being devastated by the ongoing atrocities being inflicted upon them by the Islamic government of northern Sudan (GoS).