A Light in the War Against Darkness 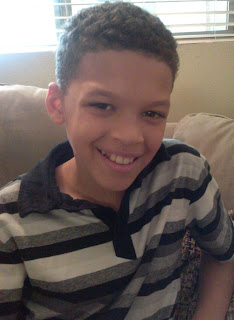 We know they are out there, the unsung heroes of the faith who are willing to set aside their own desires and offer all they have in obedience to the Lord.  Once in a while, we get a glimpse of these warriors for the Kingdom.  Most recently, we witnessed this on Friday.
Brian and his family had read the newsletter about the suffering Syrian Christians and the portion about the young boy who gave his $5 to help children in need instead of buying candy, particularly touched his heart.  He told his mom that he wanted to give his savings to the Syrian church.  She called Friday morning and made the donation for him.  As we communicated back and forth, more information came to light.  Brian had also received a gift card for his birthday that he desired to cash out so that he could give even more.
Brian is ten.  He also volunteers here with us in the office.  He again stands with us, committing now both time and treasures for the Kingdom, shining as a light in this war against darkness.
But there is more to this story!  Brian had been struggling on and off for about a year with serious health concerns.  Last November, whatever was attacking his body came on full force.  He couldn’t even function as a normal, healthy, active kid any more.  He had no energy to even go outside and play.  He couldn’t do his normal daily activities, including school.  He had aching pain from head to toe: severe headaches, punishing joint pain, extreme fatigue, and sensitivity to light.  He was in constant pain, sometimes falling to the ground because of the intensity of how badly he was suffering.  He still had a heart to help his family with the dishes and had to support himself by leaning on the sink.  His condition perplexed the doctors that his family sought out in desperation for help.  They came to believe that Brian had some rare lifelong disease.  In the midst of this, the whole family poured themselves into prayer, including his little brother who prayed, “Jesus, heal my brother, I want to play with him.”  And, the Lord did!  All of Brian’s symptoms are gone!
What has been Brian’s response?   He wanted to know when he could return to volunteer at Far Reaching Ministries, and as you have also read, he is now investing his treasures as well.
………………………………………………………………….
Hearing Brian’s story is compelling.  He is acting on the moving of the Holy Spirit at an age when most of us only thought about friends, playing, video games and sleep-overs.  We are all moved by stories of that nearness with the Father, of those who hear and choose to respond seamlessly.  But really, this story can belong to any one of us, because the source is not us, it’s the Holy Spirit.  The book of Ephesians tells us we are each God’s masterpiece, His poema, uniquely created with a plan, prepared in advance for us.  (2:10, 4:12)
Don’t miss what God created you for!  We all get one short life.  There are no do-overs, nor second chances.  Glorify the Father with every breath….